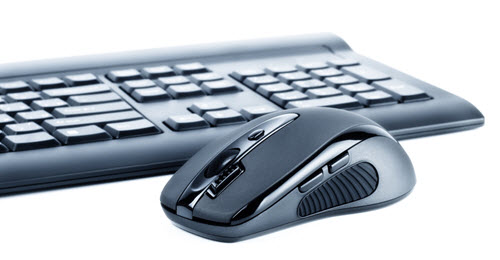 Wireless keyboards might be almost the norm now for computer users.

But are they really a better choice, or are you using one because it looks cool?

You probably never stopped to ask yourself that question, right?

That’s not necessarily the case, and I’m going to explain why.

We need to cover this before going into any further detail.

Bluetooth is a form of wireless communication technology that was very popular in the early days of the new millennium.

But it was never really used extensively in computer peripherals.

An RF keyboard is what’s used in the majority of peripherals described as being “wireless”.

They use radio waves to communicate via a radio frequency (RF) with the dongle plugged into your computer.

Most modern wireless keyboards communicate in the 2.4GHz frequency range, which allows them to communicate with a PC that’s up to 30 feet away.

Okay, so that’s the technical stuff taken care of.

Let’s look at the pros and cons of owning and using a wireless keyboard.

The real selling point for wireless peripherals is that you don’t have to worry about cables snaking across your desk, behind your screen, etc.

That means you could free up some extra desk space by not using a wired keyboard.

But how many times did those cables actually get in your way?

Sure, they might mess up the visual Feng Shui of your desk, but do they actually get in your way…or do you just “feel” they do?

If you’re a total neat freak, then you’ll opt for wireless.

If you’re not then those cables might be kinda ugly, but how big of a deal is that in a home office?

Are you trying to create a pretty working environment, or a productive one?

Wired keyboards usually come fitted with a 6-foot cable, which should be more than enough for the 99.9% of people who sit at arm’s length from their computer.

Bluetooth devices have a range of up to 33 feet, but line of sight is a factor here.

Wireless peripherals, such as a keyboard, have a range of between 6 and 30 feet, depending on the communication technology driving them.

The question to ask yourself here is how far away do you need to be from your desktop or laptop computer?

Do you know anyone who sits more than 6 feet from their computer while they’re working?

If so, drop me an email to explain why.

Any type of wireless technology can suffer from signal interference, no matter what the manufacturers say.

These devices communicate using radio waves, and radio waves can and do get scrambled.

What can cause interference with RF devices?

The problems usually come from other RF devices like headphones, printers, or anything else sharing the same 2.4GHz frequency.

Now if this is just a signal drop while you’re listening to Spotify, then you won’t care.

But when you have the same “signal” problems with a wireless keyboard it’s beyond infuriating.

It means fiddling around uninstalling and reinstalling drivers, looking for updates, disabling other devices, etc.

That’s the position I found myself in two years ago, and it’s also the basis for writing this blog post – I explain all that in detail shortly.

Tech product “reviewers” always bring this up when talking about wireless keyboards.

Because there is a lag (delay) between what you type on a wireless keyboard and when that information appears on your screen.

This delay is measured in milliseconds, so the average human being won’t notice.

Unless something goes wrong, in which case you’ll find yourself shouting at the screen because the keyboard is duplicating everything you type.

Or you have to wait for the PC to catch up with the data wobbling over the RF connection to your wireless dongle.

Wired keyboards don’t have this problem unless your keyboard is completely borked.

But the honest truth is that unless you’re a pro gamer talking about response times is silly.

And that’s from somebody who used to write their own mouse configuration files for Quake death matches.

One of the single most frustrating aspects of owning a wireless keyboard is you need to have spare batteries on hand at all times.

I can guarantee that at least a few of you reading this have taken that 1am drive to a late-night grocery store because your keyboard died just as you were in the middle of something important.

What most people suggest is buying two sets of rechargeable batteries and a battery charger.

That’s an environmentally friendly option…as long as you remember to keep your spare batteries charged.

Which most people don’t. 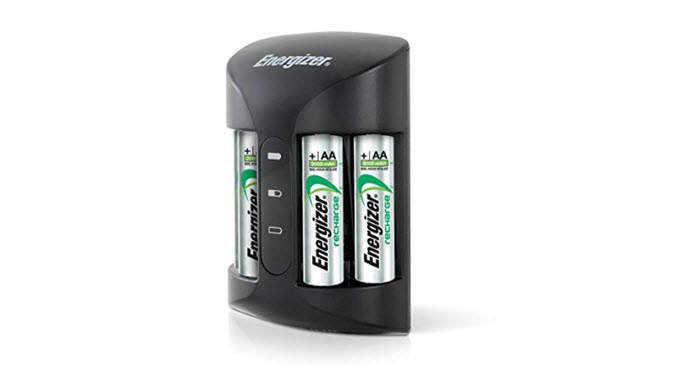 So maybe get a charger with a digital readout so you know exactly where you stand.

Wired keyboards never need to be recharged, and more importantly, they never run out of power at midnight on Sunday.

Every wired device needs its own USB port to work properly.

So your USB keyboard and mouse will take up two ports out of however many you have.

Most modern desktop PCs come with more USB ports than you’ll probably ever need, so this usually isn’t a huge issue.

But if you’re using a laptop, or a PC without a ton of free ports, then being able to connect both your keyboard and mouse via the USB dongle is a better solution.

Your dongle only takes up one USB port but connects two devices.

Wireless devices win in this category because they can actually reduce the number of USB ports you use.

When you’re troubleshooting issues with a PC, you have to take every component in a device chain into consideration.

What this means is that if I have to troubleshoot a wireless keyboard I need to consider the following:

When I compare this to a wired keyboard my troubleshooting gets a lot easier:

Don’t get me wrong – most modern wireless keyboards are rock solid, and probably won’t ever give you a day’s trouble.

But if they do, that’s when the real work starts, and it’s never, ever fun.

You can get a basic wired keyboard for about $14, and a similar wireless keyboard costs around $18.

So, there’s no point in splitting hairs on price, right?

Well…you kinda forgot to include the rechargeable batteries and a charger for them.

That adds an additional $14 to your overall costs, so the wireless keyboard now costs at least $32.

And you can keep going – you can even get solar powered wireless keyboards if you have $100 to spend on a keyboard and mouse, that is.

What About Security Risks?

Did you ever stop to ask yourself can wireless keyboards be hacked?

If you haven’t, then the answer to the question is “Yes…yes they can”.

Any device using wireless communication technology can be hacked.

Anyone telling you otherwise either doesn’t know what they’re talking about, or they’re an idiot.

Wireless keyboards can most definitely be hacked.

And it can be done from hundreds of feet away if the hacker used a drone to bounce their signal off.

Here’s a pretty exhaustive whitepaper on the subject of RF device security risks from the team at Bastille.

Data entered with a wired keyboard can also be hacked, but that means using a virus to do that, a physical device like a key logger, or a combination of the two.

Something else you probably didn’t consider is the additional software you need to install to get your wireless keyboard up and running.

Windows 7 onward does a pretty decent job detecting cabled devices, but that’s not always the case with their wireless equivalents.

They usually need some kind of proprietary (custom) software installed, which then results in a stack of bloatware on your PC.

A wired keyboard only needs to be plugged in to a functioning USB keyboard, and Windows will set it up with the standard HID (Human Interface Device) driver.

I prefer to keep my Windows install as lean as possible, and that includes installing the bare minimum of drivers and other software.

Plus, I always had to keep a wired keyboard around for reinstalling Windows on my PC…because wireless keyboards are just paperweights without their drivers.

Why I Swapped To Wired Keyboards

I’d exclusively used wireless keyboards for years but a few recent experiences made me rethink that.

Basically, my beloved Logitech wireless keyboard died late one night while I was working on a huge project.

It went from functioning properly to freezing, repeating what I was typing, and basically making my life miserable.

So, I rebooted the PC, changed out the batteries and tried again.

Next up, I did a full virus scan, while checking for updated drivers, and going through ‘Device Manager’ for any potential issues there.

That turned up exactly zero solutions.

I removed and reinstalled all the driver software, moved the dongle to a different USB port, but still had the same result.

In the end I broke out my “emergency” Logitech wired keyboard and got on with work.

I replaced the busted wireless keyboard with a brand new one a few days later.

After a few months of using it I ran into the same basic problems again – performance drops, random disconnects etc.

This time around I even tried a fresh install of Windows, but nope, another “faulty” wireless keyboard.

That was when I stopped using RF keyboards and mice.

And the thing is, I’ve never looked back.

So I had to ask myself if wireless keyboards are actually better than wired ones?

I have my answer, and hopefully now also given you some food for thought.