You need to buy a good laptop but don’t have a lot of cash to spend?

That’s no problem – you’ve come to the right place.

The tips I share with you here are the same ones I’ve used to buy all of my desktop and laptop computers over the last 5 years.

I’m not a cheapskate – I just got tired of spending thousands on a brand new laptop, only to watch it lose half its value within a few months.

There are lots of other blog posts out there on “The best laptops under $500”, or “best budget laptop for $500”, but if you’re reading this page I’m pretty sure you don’t have $500 to spend.

And, to be honest, any idiot can walk into a computer store, hand over $500 and walk out with a brand new laptop.

None of those blog posts actually answer your question, so we’re going to.

How Much Can You Afford To Spend?

If you’re wondering how much a decent laptop costs, the first place to start is with your real budget and not what you think you can afford.

It’s all too easy to start with a budget of $200 and wind up spending twice that because you came down with a sudden case of shiny object syndrome.

Just bear in mind that you can actually get a fully functional, business-class laptop for as little as $150.

Yup, really, and I’m actually going to show you how.

You won’t need to sell a kidney to get a laptop at a lower price than you thought possible.

First things first, the advice we share here is to help you buy a work laptop – not a gaming PC.

That means the specs we look at are based on using apps like Word, PowerPoint, multiple web browser windows and basic graphic design software.

When I started writing this blog post it was with a mental budget of $200 for you, because I know that’s roughly how much you’ll need to spend to get a laptop you won’t want to throw against the nearest wall.

You’re also not going to find a gaming laptop rig for that kind of money, unless it’s stolen.

The next reality is that the laptops we’re talking about are used or refurbished, but that doesn’t meant they’re junk.

The final expectation is that this won’t be the latest and greatest laptop on the market. It might only have a 14-inch screen, a 500GB hard drive, and 4GB of RAM. Don’t expect a dedicated GPU, stereo speakers, and all that other cool – but extremely expensive – stuff.

But it will be more than enough for the average user, especially somebody working remotely or working from home.

Your first step in finding a low-priced laptop is to avoid computer showrooms, chain stores and most e-commerce sites.

Sure, you’ll be able to find cheap-ish laptops in those places, but their “budget laptops” tend to be Chromebooks or similar. Not that’s there’s anything wrong with a Chromebook, but it’s not a true laptop.

What you’ll also find is that many of these places buy refurbished laptops from the same sources I give you, add a 100% margin to them and then sell them. There’s nothing illegal in that – but you’re paying way more than you need to for a basic work laptop.

The first place to check for a good laptop at bargain prices is Amazon. Yes, we said earlier to avoid “most” e-commerce stores, but Amazon is the exception.

All you need to do is search for “refurbished laptop” and then sort by price and Avg. customer review, and processor type (i3 or i5).

Note: Refurbished laptops are second hand, but are usually ex-government or ex-business stock. They’ve been maintained by professional IT departments, never had a virus, and usually look brand new.

Straight away you’ll find a whole list of Dell Latitude, Lenovo ThinkPad T-series, and HP Elitebook laptops for under $200.

In fact, you’ll be spoiled for choice of i5 laptops with 4GB – 8GB of RAM, and some of them even feature an SSD (Solid State Drive).

But before you make your final decision be sure to swing by eBay.

What most online shoppers don’t realize is that many of the same people selling via Amazon stores also have stores on eBay.

But they know they can charge more on Amazon because it’s viewed as being a “premium e-commerce” store whereas eBay is where people “sell their junk”.

There’s nothing “junky” about many of the laptops you’ll find on eBay. 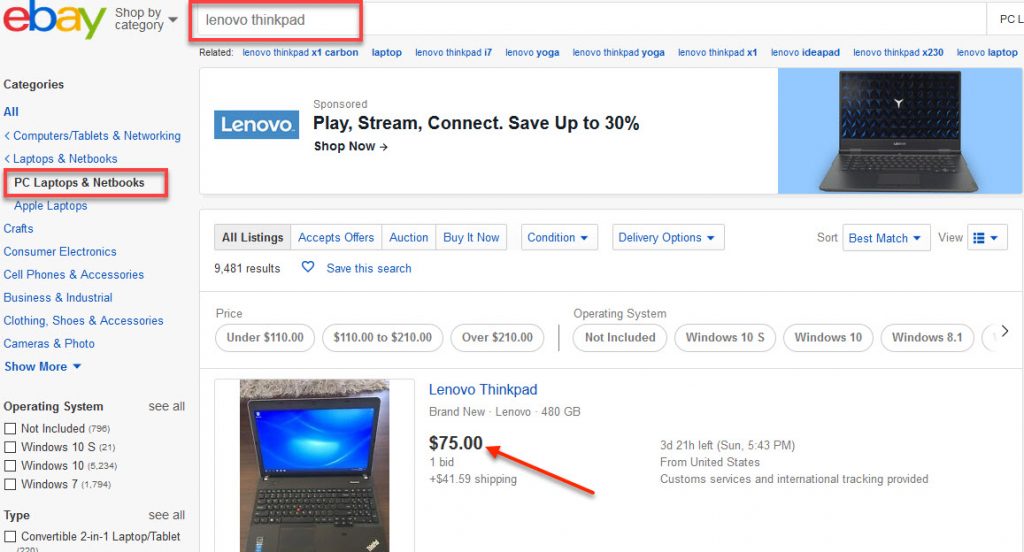 What you should see is a price difference of between 30% – 60% less in your favor.

Basically, you can buy the exact same laptop for $120 instead of $200, or even under $100 if you’re willing to put up with tiny scratches or a hairline crack on the case.

You probably won’t get more than the obligatory 90-day guarantee with a refurbished laptop, which puts some people off.

Remember, these are ex-government or corporate laptops – they were purchased based on their high specs and reliability i.e. they were built to last.

You’re benefiting because somebody bought them as a job lot at auction, so got them at a fraction of their original price. So, you get to buy a $1,500 laptop for $150, even though it’s maybe only 4 or 5 years old.

I can’t guarantee that a refurbished laptop will last for 6 months or 6 years.

But my personal experience has been that they keep on working until the day I replace them.

Which laptop brands are most reliable?

A few decades of experience has taught me that I’d much rather have a reliable laptop than a flashy one.

So the laptop brands/models I prefer are:

In my opinion, the only reason you should spend $1,500 on a laptop is if you have a 5-figure monthly salary.

Apart from that get yourself a refurbished one off eBay or Amazon – you’ll be amazed at how much value for money they offer.